Andy was away on his annual fishing trip with ‘the boys’ Father’s Day weekend so our Father’s Day celebration was detained a week.

Andy’s sister hosted a Father’s Day Family Barbecue this past Sunday, inviting their parents, her three children, their ‘friends’ and our family…for a total of 12.

My sister-in-law called me this past week to confirm the menu:

Here are all the goodies that I brought:

-a cutting board and knife in a shield for the bread
-a pot to boil the pierogis in and a bowl to contain them
-a large spoon to scoop out the pierogis
-the frozen pierogis travelled in the cooler with freezer packs
-missing is my Bodum Bistro Sauce Pot for transporting Michael’s mustard free barbecue sauce. I like it because the lid holds a silicone brush which goes right back into the container so there is less risk of cross-contamination by putting it down somewhere.

The boys have been at me to make their favourite Dairy and Egg Free Pierogis for some time now…I thought this would be the perfect time for them to learn how to make them. 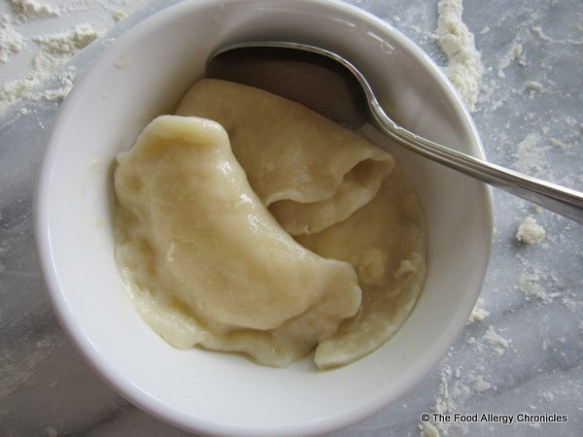 Pierogis are not difficult to make…but they are time-consuming. I like to split the steps into two days:

I heated the reserved potato water while the boys measured the ingredients for the pierogi dough.
After the dough had time to rest for 30 minutes…the boys started to roll out pieces of dough to fill with the potato filling.
Pierogis were frozen on cookie sheets and transferred into freezer bags…setting aside enough to be boiled up for dinner.

Michael ended up taking control of the pierogi making after his father showed him how he remembered watching his father make pierogis…rolling out the dough and cutting out circles. 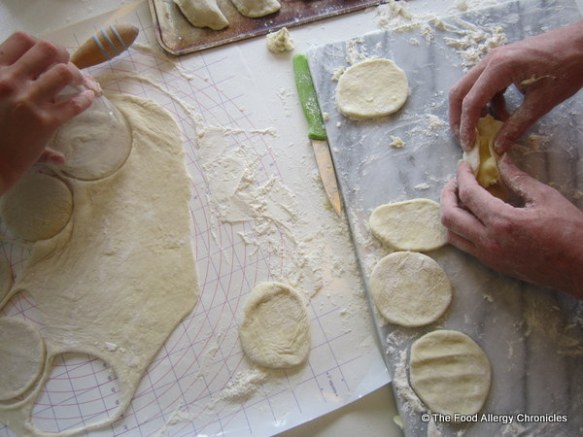 Matthew didn’t like getting his hands all floury so Michael convinced him to be in charge of rolling out the dough and cutting the circles while Michael filled and sealed the pierogis.

I left them to sort it all out. From the other room, I could hear Michael’s encouraging words…”You’ve got the fun part…cutting out the circles.” Adding in,  “Whatever you do…do not start in the middle…start out here at the edge.” 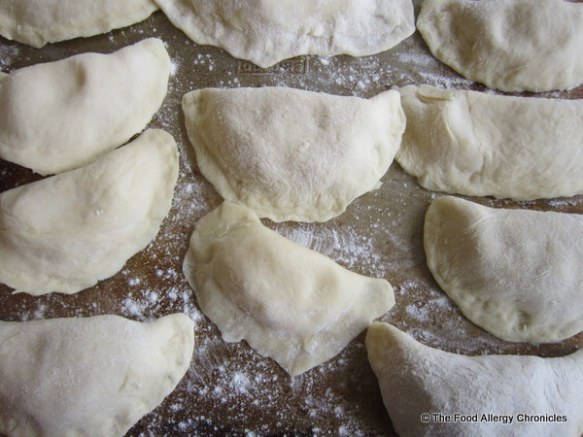 With admiration in his voice, I heard Michael state to Matthew…“We’re making pierogis!”

Learning how to cook/bake in general, let alone with food allergies is a life skill…basic cooking skills seem to be getting lost in this ‘fast food’ world.

My starting point…teaching my boys how to make some of their favourite allergy friendly dishes.

P.S. You’ll never believe what happened as I sat writing this post…I looked out the window to see two of my boys’ neighbourhood friends walking to our front door. I called out to Michael, “William and Victoria are here.” Michael’s response, “I know. They are here to help make the pierogis.”

How awesome is that!

P.S.  Michael shared some of his Dairy and Egg Free Pierogis at the family dinner…all were impressed. Even Grandpa…’King of the Pierogis’…was curious to know what was in the potato filling and how we could make the dough without any egg!

I am curious to know:

Are allergic youth learning to cook for themselves at home or are they relying on parents or ‘processed allergy friendly food’?
Are allergic youth interested in learning basic allergy cooking skills? Would they sign up for a course if it were offered? 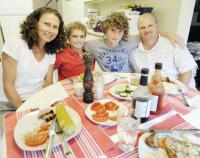 That's us, the Food Allergy Chronicles family. Learn more about us by clicking the photo.

I am not a food allergy professional. Any products I mention in these posts are my own personal recommendations. No one’s paying me to recommend them. They’re just what has worked for our family. Your own needs and preferences may be different!